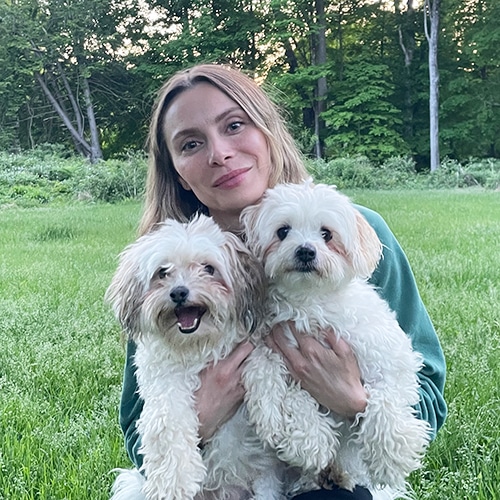 Wherever Ashley has lived, the one constant has been animals. As a child, she would frequent the zoo as often as she could. As she got older she began to volunteer at animal sanctuaries. At 18, she worked at an animal hospital where, though tending to sick creatures always hurt her heart, Ashley knew the love and care she gave to them was needed and never went unappreciated.

She grew up with a Great Dane, Axel, later shared her home with a Rottweiler Doberman named Sophie and a Maine Coon named Kunas; lived in Los Angeles with an English Bulldog, Riley, who eventually garnered more than 500k Instagram followers, and now lives with two Maltese Poodles, Fitzgerald and Hemingway, and her fiancee, Chris in lower Easton.

Why should you trust me with your dog?

In my 36 years of life, my greatest happiness has derived from animals. Whether it’s been living with dogs and cats in my home, taking care of other people’s pets, or working with them professionally, it’s been integral to my life for as long as I can remember. Working with dogs continues to be less of a job and more of a vocation. I treat your dogs just as I treat my own, with the utmost care and appreciation.

What do you enjoy about working at Active Dog?

I enjoy waking up every morning with a smile on my face, knowing that I get to spend my days working with animals I adore, being active in nature, and giving out all the love that these precious creatures deserve.

What did you do before you worked at Active Dog and why did you decide to work with dogs?

Before Active Dog, I did a little bit of everything. I managed photography and recording studios, was a stylist, paralegal, a writer and contributor to fashion magazines and health and wellness books, but, in my spare time, always took pleasure in serving as a caretaker for friends and acquaintances’ pets. I eagerly pursued an opportunity with Active Dog to do what I love full-time, working with dogs.

Here’s a look at what’s happening on our nature hikes. We post photos and videos for every hike.

Daisy is the cutest!!!

☀️🌳Another beautiful day for a hike with the dynamic duo that is Cleo and Sadie!!🐶🐾💦 ... See MoreSee Less

Want to Join the Pack?

Getting started is easy.
Just let us know about you and your furry friend(s).
We’ll meet up in person to make sure there’s a good fit all around!