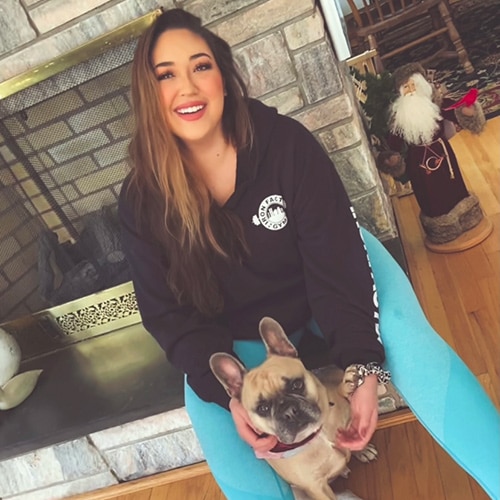 Kat was born in Louisiana and raised in Westchester, New York. Growing up she had two German shepherds named Jake and Pete, and then a Jack Russell terrier named Annie. From early on, Kat started to ride horses and compete in horse shows. Her love of all animals had no bounds.

When it came time for college, Kat was considering becoming a veterinarian, but ultimately chose a major of art & design. Upon graduating from Marist College with a fashion degree, she wound up in Manhattan designing and illustrating activewear clothing, which was an unforgettable experience.

Now, back in Westchester, Kat loves to stay active at the gym, honing her cooking skills, and play with Mason, her favorite French Bulldog. To her, dogs aren’t merely animals—they are the best friends that anyone could have!

Why should you trust me with your dog?

You should trust me with your dog because I strive to understand each dog’s individual needs, characteristics, and quirks—all the great things that make your pooch unique. It is my personal goal to give your dog an experience he or she will enjoy each time and will come back to your home feeling relaxed, happy, and most of all, loved!

What do you enjoy about working at Active Dog?

I enjoy working at Active Dog because it brings me endless happiness to see your dog enjoying the outdoors just as much as I do. Knowing that I can add excitement to their day while enjoying all that Mother Nature offers out on the trails is pure bliss for me.

What did you do before you worked at Active Dog and why did you decide to work with dogs?

Before I worked at Active Dog, I was an activewear designer in NYC. Although I love art, designing, and fashion since I was a little girl I’ve felt a strong connection to animals of all sizes. Spending my day outside in the countryside in the fresh air with the fabulous creatures we call “Man’s Best Friend” is not just a job to me. It’s therapeutic!

Here’s a look at what’s happening on our nature hikes. We post photos and videos for every hike.

Pretty girl Irie is learning that the sound of the doorbell means to go to her place! 🔔 ❤️🐾 This will replace her jumping at the door and barking.

Still lots of snow up there! And a beautiful sunny day! I'm jealous as I sit in my office 😪

🚨 Posting to get the word out 🚨

Stark took off from someone while hiking at Cranbury Park this past weekend. Please repost and share to get the word out! ... See MoreSee Less

This spirited and sweet 5mo Jack Russell Terrier pup is new to the Active Dog family and is ready to take on the trails. Today he 🐾PAWticularly🐾 enjoyed running around with his new pack mates and sniffing anything he could get his little snout into. Every log, bush, nook and cranny was destined to be smelled today by this little bundle of energy! 🪵🐕🌲 His playful nature made him a wonderful member of today’s pack. Zipping through the trails, jumping on every rock, splashing his paws in streams—this pup really made the most of his first hike!

We’re thrilled to have you Chavo, welcome to the PAWty! 🦴❤️ ... See MoreSee Less

Want to Join the Pack?

Getting started is easy.
Just let us know about you and your furry friend(s).
We’ll meet up in person to make sure there’s a good fit all around!